St Mary and St Lawrence is a grade l listed building that lies in the very centre of the village. Its origins go back to the founding of an Augustinian Priory on this site in c.1112. The priory dedication was St Leonard and it became affiliated to the monastery at Nobiliac near Limoges in France. Following the Statute of Leicester (1414) its by then very substantial possessions were acquired by the King who in turn granted them to King's College, Cambridge in 1448: the modern church consists of the nave and parts of the chancel of the original priory church. Unusually the churchyard is only on the south side as the former priory quadrangle on the north side now forms part of a private garden to Great Bricett Hall. This building also contains remains of the former priory buildings and is in fact “semi-detached” onto the modern church. 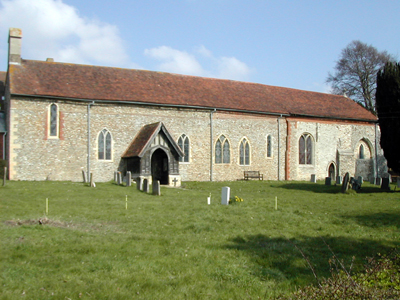 From the outside the church is a large but relatively modest flint building under a tiled roof whose walls show the signs of many alterations over the years. A porch and simple bell turret are Victorian additions. There is an old sundial set into the S wall indicating the times of mass. The inscription “Leonardus” - the original priory dedication - can just be identified in the Norman decoration of the main S door inside the porch added in Victorian times. 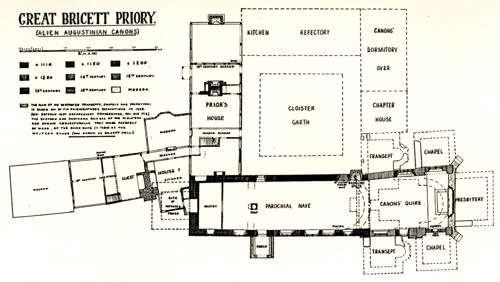 The Plan of the Church

The plan shows the extent of parts of the priory church now lost but also the scale and open layout of the modern building with one full width combined nave and chancel. The whole interior space is covered by a substantial, largely undecorated, wooden tie-beam roof. The interior has excellent acoustics and forms a versatile worship space. 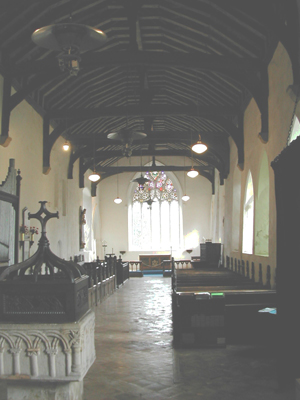 The font is Norman and with distinctive carved designs on its four sides. Most of the substantial East window is clear as the former Victorian glass was destroyed by a wartime explosion at the nearby Wattisham airfield. The window design is probably a Victorian copy of what was there before and the four evangelists from the former medieval glass are set into one of the S nave windows (see also www.cvma.ac.uk). A nearby window shows St Mary and St Lawrence in modern stained glass. The wooden pulpit, probably Jacobean, is to an unusual octagonal design.

Half way down the North wall is a plaque commemorating the eleven men from the Parish who made the Supreme Sacrifice in the First World War. R W Crick (known as William) who is listed on the plaque died after the War, of Tuberculosis he contracted while serving in the trenches in France, and is buried in a Commonwealth War Grave in the Churchyard.

You can use this link to see where others died.