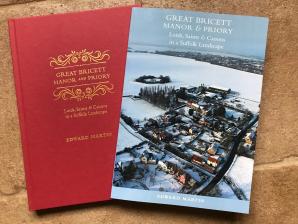 Great Bricett may be one of the lesser-known places in Suffolk, but it has a fascinating history. Its medieval priory, founded in the early 12th century, was one of the earliest Augustinian priories to be established in England and is the only one to be a daughter-house of the collegiate church of Saint-Léonard-de-Noblat, near Limoges in France. This was the centre of the cult of St Leonard, the patron saint of prisoners, and the priory at Bricett was dedicated to him.

The priory church became the parish church, and the other surviving remains of the priory are contained within Great Bricett Hall, an unusual timber-framed wing on the north side of the church. This was thought, stylistically, to date from the 13th century, but has now been dendro-dated to the 1320s. These remains are not a standard claustral layout, instead, they more closely resemble a manor house.

Near the church is an additional challenge to interpretation, an earthwork resembling a flattened motte-and-bailey castle, perhaps to be interpreted as a semi-fortified ‘forcelet’. This earthwork probably contained the residence of the priory’s founder, Ralph fitz Brien.

The book details the closely intertwined histories of the manor and priory down to the present day.  160 Pages, many colour pictures.

Copies available from Great Bricett PCC via The Old Vicarage, 01473658609 or arland.shawetaylor@btinternet.com