In 2009 the organ which had served the church for many years had deteriorated to a very bad state and was replaced with an historic organ which had become surplus to requirements at St Martin's Hospital, Combe Down and had been built by John Clark of Bath. Constructed around 1851, it is believed to be one of the first in England to be equipped with a pedal organ.

The organ in its new livery, photographed during the Dedication Service at Great Bricett, 5th September 2010 ... 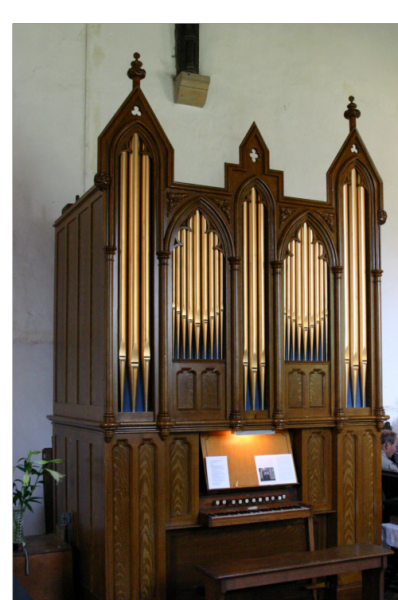 And this is as it used to be in its previous incarnation ... 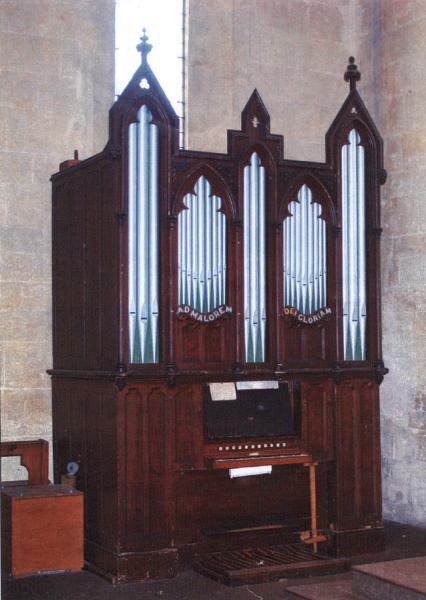 Information concerning this instrument was originally supplied to us by the Revd. Ian Mallard (in litt., 20 June 1995), who had seen in it March 1970.

Arrangements were made for us to see this instrument on 8 July 1995, through the courtesy of Mrs Anne Law, a member of the hospital's administrative staff, who knew the organ well, having worked at the hospital for some forty years and sung in the choir in the 1950s when the organ was still hand-pumped. Mrs Law told us that the organ was regularly maintained and used on Sundays by the Society of St Pius, as well as for an annual carol service, occasional funerals etc. We found it to be in good order, but its tone somewhat muffled by a stiff canvas screening between the

facade and the swell shutters. The embossed inscription across the facade AD MAJOREM DEI GLORIAM has the letter 'J' reversed.

The date '1851' was found stamped on the uppermost manual key. The dimensions and specification of the instrument are very similar to those of the one dated 1858 now at Milbome Port, apart from the Twelfth and no provision for a Double Dulciana (resulting in a shallower case), the arrangement of the drawstops (on jambs to either side of the keyboard on the one at M.P.) and the 'Gothick' decoration of the facade (more 'classical' at M.P).

The organ looked disproportionately small at St Martin's, considering the size of the chapel, and we wondered if, perhaps, it had originally stood in the west gallery or else come from elsewhere. This question was unexpectedly answered by Dr John Oswin (Bath) in letters dated 16 September and 25 October 1995:

'While browsing in the Library I came across the History of a Parish: St John the Evangelist, Lower Weston by Ball, published in 1986. It refers to the organ being by Speechley, but this being installed in 1871 and replacing an earlier organ by John Clark of Monmouth Place, Bath, which was inaugurated on 26th June 1851. There is also a photograph of the organ in St Martin's Chapel and reference to Clark building an organ also at Christ Church (presumably Christ Church, Julian Road). So the organ was already 20 years old before it moved to its present home.'

"The full transcript for the opening of the [Clark] organ is given from the Bath Chronicle, Thursday June 26th 1851: ... "The organ which was built by J. Clark of Monmouth Place is of neat design and harmonizes with the character of the building; it is much admired for its fullness and richness of tone and it well maintains the reputation of the builder, whose reconstruction at Christ Church last year gained such general satisfaction"...'

Our interest in the organs of the Bath organ-builder, John Clark (1827-1873), was stimulated by the discovery, in February 1995, of one of his instruments which had been dismantled and stored, and its subsequent retrieval and re-erection at Milbome Port. We had heard about it in a very roundabout way. The new owner of a property in Wiltshire had granted the previous owner permission to leave the organ in a shed on the property there for a short period, but after waiting some eighteen months he decided he would have to take steps to have it removed. His sister happened to meet the organist of a London church, and told him of her brother's problem, and the organist, who happened to be a friend of John Budgen, passed the address on to John, who mentioned it to me.

As it happened, I was about to visit a friend living in Wiltshire not far away, so I arranged to call and see the dismantled organ. It had obviously suffered greatly in storage (parts of it having lain in water, as the shed leaked) but the facade looked interesting and I was able to read the maker's name 'John Clark' on the keyboard fillet. When I communicated this information to John Budgen it was enough for him to recommend a rescue attempt. Many years before, in 1948, John had seen an organ at St Thomas a Becket, Widcombe/ Bath, which bore Clark's nameplate, and had been pleased by its sound. So, having established its specification and approximate size, and having obtained the consent of the former owner, John, Margaret and I soon had the organ back at Milbome Port.

At the time we had no information about John Clark other than that provided by John and in a booklet 'The Organs of Bath and district' by Haycraft (1932), who mentioned the brothers John and James Clark 'who later separated' and listed eleven churches and chapels (mostly on the south side of the city) where Clark organs were said to have been installed. We learned from the former owner that he had got 'ours' from the Penitentiary Chapel in Walcot Street, Bath, and from a clergyman at Bath that the one at Widcombe had been destroyed just a few weeks previously ("it was no good, and had asbestos in the blower"). On our visit to Bath on

8 July 1995 we found that one had been replaced long ago and another was just a facade hiding the loudspeakers of an electronic, but happily, when we we visited the former Workhouse, by then St Martin's Hospital, with its Chapel (erected 1846), we found the organ lan Mallard had seen in 1970 still in playing order.

Enquiries about the Clark family were made on our behalf by three members of our association (EOS), Brenda Knight and Patricia Dening (both also members of the Somerset Organists' Association) and by Dr John Oswin (Bath). In summary, they established from the censuses of 1851,1861,1871 and 1881 that the brothers John and James must have been bom in 1826/27 and 1828/29 respectively, and had lived at various addresses in Bath. Both were mentioned by name in issues of the Bath Directory from 1846 to 1876/77, when only James was listed, John having died at the beginning of September 1873. (James's entries continued until 1895.)

A display advertisement by John in 1850 is reproduced here:

In returning his sincere thanks for the distinguished patronage he has received, begs to inform the Public that he continues to produce Organs, which, for general excellence in quality and tone, cannot be surpassed. J. C. having a perfect knowledge of the different branched of the Trade, and having every part manufactured on the Premises, under his immediate inspection, is able to produce Organs which cannot fail In giving satisfaction to all who may honor him with their patronage.

N.B. ORGANS REPAIRED AND TUNED BY THE YEAR.